Below is a transcript of the section of the audio link above in which Hendl discusses composing and recording the Young People’s Record "Concerto For Toys and Orchestra," and how the recording session was photographed for an issue of Life magazine which was never published.

And of course came such a thing known as the Army, and the war. And when I got back out of it all into civilian life, I looked around for conducting positions and piano playing positions -- openings. Of course there were none. In fact, no one seemed much interested in the fact that I'd spent a great deal of time practicing piano and a great deal of time memorizing, studying and conducting scores in school. But it was terribly important that I begin to get a job, and start on the road up once again into musical life in America.

So I decided to turn composer. It was a decision arrived at quite that way. It was simply one day to decide to compose. There was no inner urge that marks so much of the composer's inspiration. This was simply a question of necessity.

I had very good luck and composed a broadway show that ran for 18 months, and although it didn't put me in ASCAP, it gave me a very nice weekly royalty check, which enabled me to once again practice the piano and study scores. I've kept on composing, more or less, mainly as a composer who knows that he can write certain things reasonably well, perhaps add a little bit more to the contemporary literature. But knows perfectly well that he will never compose nine symphonies ala Beethoven, or seven ala Sibelius, or even five or six, as Tchaikovsky's done.

I did however create during the years something, and that was a daughter. She's a young lady who's a ballet dancer named Susan. And because of her I began to write a series of records for children. This was about the time that I went to the Dallas Symphony Orchestra. Dallas is in Texas, as you well know. And if you don't know, you should. It's a great state, wonderful city, and I'm delighted to be returning there shortly for my fourth season.

But I remember very well one hectic day finishing a Dallas rehearsal, having a long distance phone call awaiting me from a recording company for children in New York City, saying we have an opportunity to be photographed in recording session for Life magazine. We would like very much to have you be the conductor on that solemn occasion. The only thing we need from you within the next 48 hours is a new piece of music that we could have you conduct, because we're actually going to make a record.

Well, that's been always the kind of thing that's impelled me to compose -- the 48 hour or the two week deadline or that sort of thing. So I said, well, there's always been an idea in my mind, and let me think about it for two and a half hours. The idea was to do a piece very much like Haydn Toy Symphony, except to couch it in the contemporary idiom, and to expand a little the nature of the instrumentation -- if I may use the word -- and utilize some of the modern toys of our generation. So I called back three hours later and said that the piece was practically finished, and started in writing the first page. Completed the work on the airplane between Dallas and New York City, and arrived with the score and parts here with about two hours to go for the recording session.

All of this, if I may say so, was done with at least one eye on the fact that it was to be a photographed Life session. Life magazine. And there was no effort too great, no energy that was not expendable -- no amount of energy -- for such a wonderful publicity item. Well, I arrived at the studios carrying my wet manuscript under my arm, distributed the parts -- there was an orchestra already engaged -- and in my most authoritative manner, began to conduct and rehearse the work.

There were photographers all over the place, people taking pictures from all angles. People taking pictures of the percussion section, playing these weird instruments, such as a mama doll that was in pitch, and various other and sundry items. And at the end of three hours, we were all quite exhausted, but felt that we had contributed largely to certainly a not-too-distant-in-the-future issue of a great magazine. As well as to have given to all children a wonderful record.

Oh yes, the issue of the magazine in which this appeared. Let me see, the date that we recorded this was 1949. I'm still looking for it.

I'd like to play you a little bit of the record now. 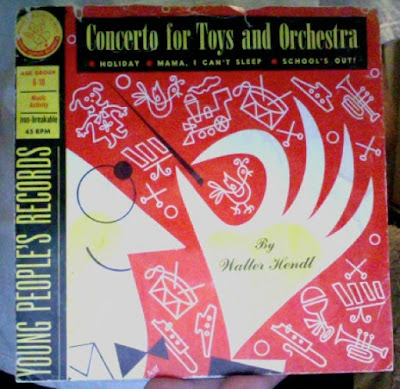