TRAIN TO THE ZOO 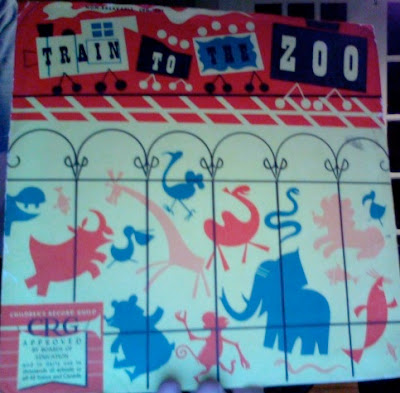 This, the first record issued by the Children's Record Guild, is performed by the quartet of Pete Seeger, Lee Hays, Fred Hellerman, and Ronnie Gilbert before they were known as The Weavers.
Posted by David Bonner at 10:41 PM 2 comments:

FOLK SONGS FOR SINGING AND DANCING 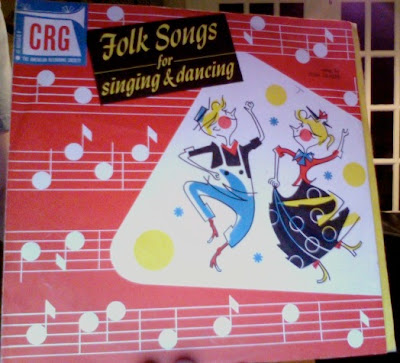 A double disc reissue compilation of nonsense and humorous songs that Tom Glazer had previously recorded for YPR.
Posted by David Bonner at 10:38 PM No comments: 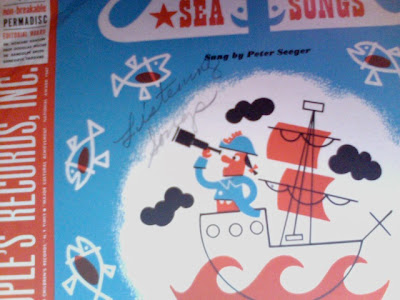 Just Pete and his banjo, singing some sea songs.
Posted by David Bonner at 10:37 PM No comments: 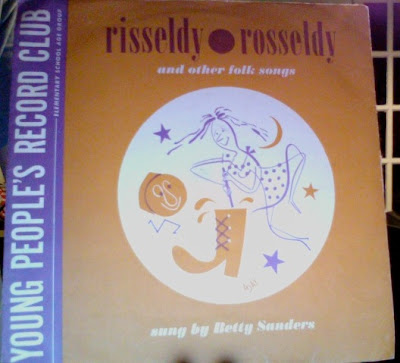 A group of nonsense songs by Betty Sanders. Her version of "Risseldy Rosseldy" is my favorite.
Posted by David Bonner at 10:34 PM 2 comments:

LET'S ALL JOIN IN 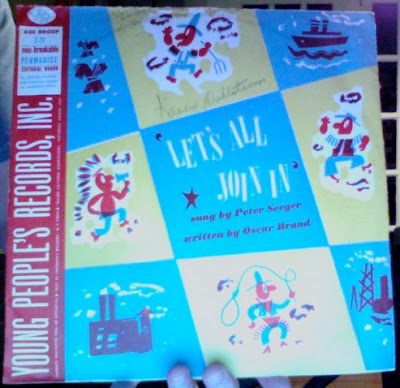 Some sing-along songs sung by Pete Seeger (back when he still went by Peter), tied together by Oscar Brand's script.
Posted by David Bonner at 10:32 PM No comments: 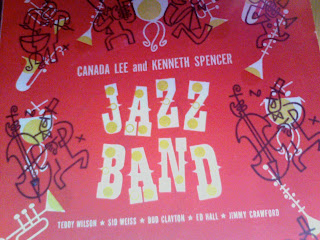 From 1948, this might have been the first time that jazz was ever presented in the context of music appreciation -- certainly the first time on a children's record. And with the heavyweight lineup of Canada Lee, Kenneth Spencer, and Teddy Wilson's quintet, it has never been surpassed.
Posted by David Bonner at 10:25 PM No comments:

A-HUNTING WE WILL GO 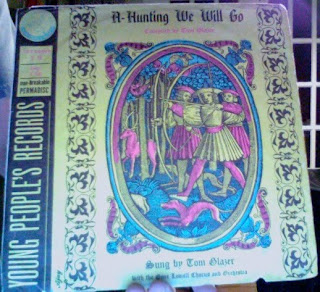 Wonderful collection of English hunting songs sung by Tom Glazer, with small chorus. Great version of "The Keeper," with small orchestral backing. This is the record that turned me on to YPR.
Posted by David Bonner at 10:22 PM No comments:

THE FUNNIEST SONG IN THE WORLD 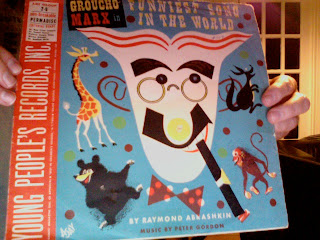 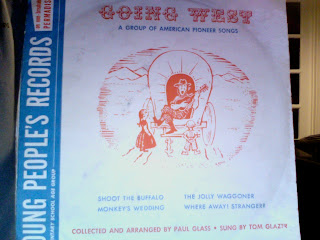 No story, just Tom Glazer singing some less-than-obvious American folk songs. The first record ever issued by YPR in its elementary age bracket.
Posted by David Bonner at 10:17 PM No comments: 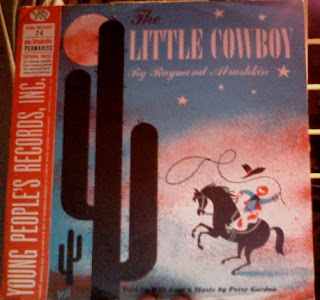 As with the Chisholm Trail record (see next entry), this one benefits from the downhome narration of Will Geer. The two stars of this story, Hank and Tex, are portrayed by Ernie Lieberman and Fred Hellerman, two years prior to the formation of the Weavers. They both do some really fine singing here.
Posted by David Bonner at 10:12 PM No comments:

Labels: Folkways, the weavers, will geer 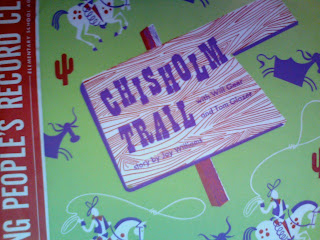 A script by the novelist Jay Williams, narration by Will Geer, and singing by Tom Glazer make this one of the best of the many cowboy-themed children's records.
Posted by David Bonner at 10:09 PM No comments: 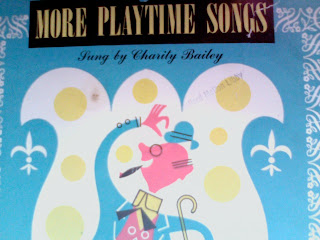 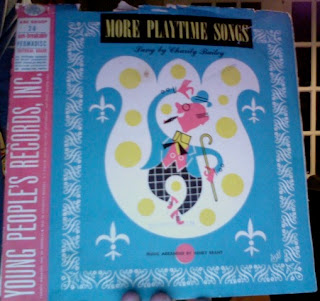 Unlike her records for Folkways, or her first two records for YPR, More Playtime Songs -- and its companion Singing in the Kitchen -- present Charity not as a classroom teacher, but rather as more of a pop singer, accompanied by the small orchestral arrangements of Henry Brant.
Posted by David Bonner at 9:59 PM No comments: 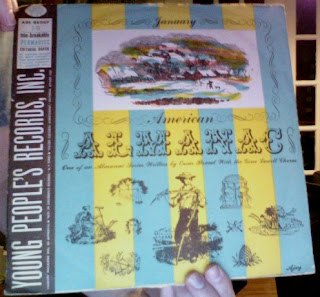 One of a 12-part series of "American Almanac" records written by Oscar Brand. He narrated all of them, and performed on most of them.
Posted by David Bonner at 9:56 PM No comments:

JEFFERSON CHORUS on the Union label 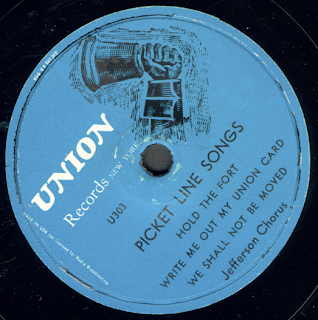 This 2-disc set of YPR's Horace Grenell conducting the Jefferson Chorus was one of only a few titles issued on Moe Asch's Union Records label. Extremely rare, this specimen was originally in Ron Cohen's collection (thanks for the cockeyed scan, Ron!), and is now in the archive at Chapel Hill, I believe.
Posted by David Bonner at 8:41 PM No comments: 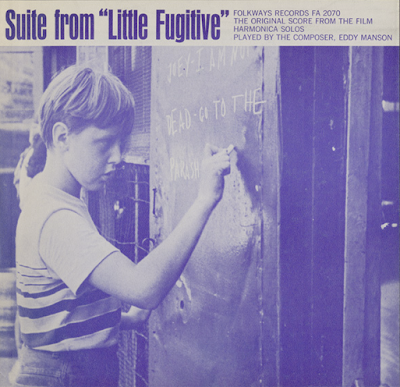 The Folkways "soundtrack"* to the groundbreaking Little Fugitive movie. Top: Credit detail from liner notes. Bottom: LP cover art.
Ray Ashley is one of the many pseudonyms of Raymond Abrashkin, who wrote lyrics and scripts for many Young People's Records.
Lester Troob, then the recently-departed president of YPR, not only supervised the sound and music of the film, but also supervised the editing of the film itself, with Ruth Orkin doing the actual "fingerwork."
*The music on this LP is not actually the soundtrack from the movie, but rather a new recording of Eddie Manson performing some of the music. (Manson also recorded for YPR.)
Posted by David Bonner at 8:03 PM No comments: 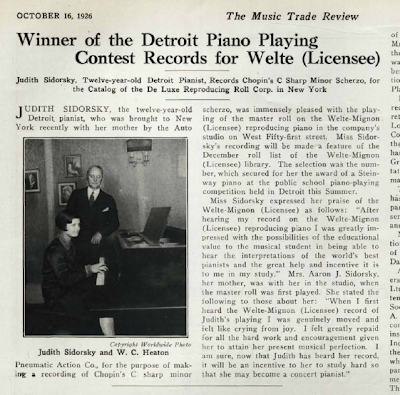 Posted by David Bonner at 1:02 AM No comments: 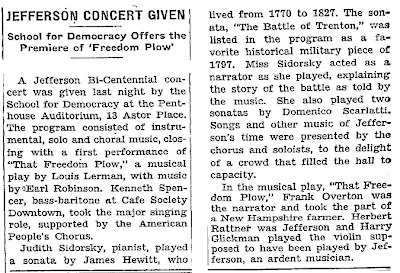 Posted by David Bonner at 1:00 AM No comments:

Posted by David Bonner at 12:51 AM No comments: