I recently learned that Margaret Sanger, the famous advocate of birth control and founder of what became the Planned Parenthood organization, subscribed her grandchildren to the Young People's Record Club. Two letters from Sanger to the Club are contained in Sanger's archived papers.
Posted by David Bonner at 3:22 PM No comments:

In addition to narrating "Jazz Band" for Young People's Records, Canada Lee also sublet office space from YPR at 40 W. 46th St., where the company was headquartered from 1946 to 1949.

During the sensational 1950 espionage trial of Judith Coplon and Valentin Gubitchev, some secret FBI documents were made public, and one of them accused various celebrities of being Communists or "fellow travelers." Canada was one of those so accused.

The attorney who defended Gubitchev during that trial was the owner of Young People's Records, Abraham Pomerantz.

Not that there's any significance to that...
Posted by David Bonner at 10:20 PM No comments: 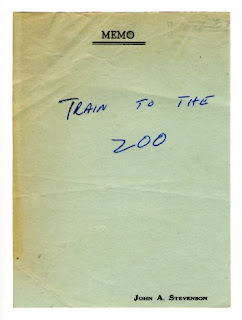 Just an artifact from the archive...
Posted by David Bonner at 10:15 PM No comments:

David Pfeffer and David Anderson were child actors in the 1950s, and performed on many CRG titles. If anyone has contact info for either of them, please email me at haymarketaffairs@sbcglobal.net
Posted by David Bonner at 5:16 PM No comments: