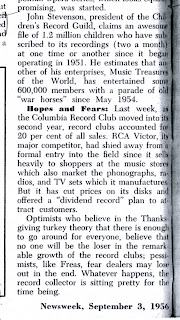 click to enlarge
Here's some recently-discovered evidence regarding CRG's membership size. The figure of 1.2 million members is said to represent the total number who had joined since the club's inception (actually 1950—not 1951). If accurate, that's a minimum of 14,400,000 records sold, because each member was obligated to buy 12 records per year. But many members renewed their memberships one or more times, so the number of records sold is likely significantly higher than 14 million. (Again assuming the data given in this article is accurate.)
It is not clear if the 1.2 million figure refers only to primary CRG club (run by Stevenson's Greystone Corporation), or if it also includes the CRG franchise operated by Book of the Month Club.
In the book, I estimated annual record sales of "well over 2 million" by BOTH sources. But if the 1.2 million cited here refers only to Greystone's CRG, then the annual sales would actually be about double my original estimate.
----------
As for the 600,000 figure given for Music Treasures of the World, that is consistent with the 599,411 figure given by Milo Sutliff when he testified at a Congressional hearing earlier that year (1956).
Posted by David Bonner at 6:06 PM No comments:

The Ballad of Irving Katz 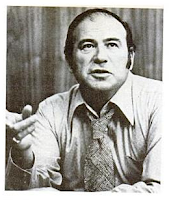 Irv Katz, circa 1972
Irving Katz was a well-traveled record label salesman back in the day. He started with Apollo Records after WWII, then left to become sales manager of the Children's Record Guild in 1950. In 1954, he worked briefly for Eli Oberstein and then the Urania label, before moving to Dallas in 1955 to head Century Distributors. While in Dallas, Katz knew Jack Ruby, according to the FBI memo below, which was published in the Warren Report. In 1960, Katz left Texas for California, where he became a pioneer in the blank 8-track, audiocassette, and videocassette business. 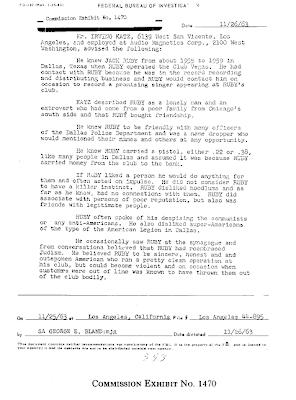 (CLICK TO ENLARGE)
Posted by David Bonner at 6:37 PM No comments: 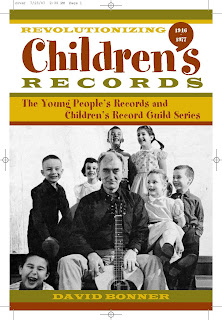 This is the design that I wanted for the cover of the book, but the publisher chose the other one instead. Which do YOU prefer?
Posted by David Bonner at 5:28 PM 1 comment:

"Funniest Song in the World" 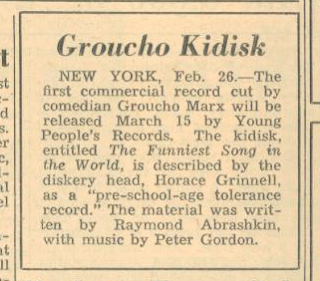 The announcement in Billboard of YPR's Groucho Marx disc. I knew this was issued in 1949, but didn't know exactly when until I recently found this article. Horace Grenell's name is misspelled here, as usual. "Peter Gordon" is the collective pseudonym of Horace and his wife Judith Sidorsky, in this instance.
Posted by David Bonner at 5:12 PM No comments:

The Jewish Spectator, a newspaper founded and edited by a progressive woman named Trude Weiss-Rosmarin, commented in 1947 that "The success of such a venture as the Young People's Record Club leads one to believe that there is a very large field for Jewish children's discs." What did she mean by "Jewish children's discs"? The content of YPR discs is not Jewish. The owner, managers, and many of the performers were, but there was nothing unusual about that. I wonder if the Spectator comment was just an isolated view, or if it generalized.
Posted by David Bonner at 9:39 PM No comments:

Here's Bryan Bishop's remembrance of shopping for YPR/CRG records at the Educational Record Center (ERC) in the early 1970s.

"...my YPR/CRG records all came from a shop, the Educational Record Center, on Sycamore Street in Decatur, Ga. This was run by a dear old lady, Mrs. Hicks (don't remember her first name, if indeed I ever knew it). This was a retail store, though specialized one, and I think she did supply many of the local schools. As I remember she also carried all the Bowmar Orchestral Library LPs, and the Living Language series, and she also had Audio Book talking books on 16-rpm records that were small with large holes like 45s. (My grandmother bought the New Testament on 26 of these records.) The YPR/CRGs were in a special area at the back of the shop, not on display but stored vertically in wooden shelves. Mrs. Hicks gave me a list of the available records, and I would pick from it. All I had to go on were the titles of the records! The list, I remember, was a single 8x11 sheet of paper, double-sided; I think CRGs were on one side, and YPRs on the other. I think they were further divided by age group. The two-record sets were grouped together, and so were the "Children's Concert Series" (I had all 8 of those, by the way - and I remember only the "Nutcracker" excerpts had YPR labels, the rest were CRG.) I'm pretty sure that the list by then was far from being the complete catalogue. I had all the available two-record sets, namely: Aladdin, Pinocchio, Sleeping Beauty, Cinderella, the Mother Goose set, The Emperor's New Clothes and Robin Hood. The first four of these were in the original, gatefold sleeves, whereas most of the records I had came in the generic CRG sleeve with the drummer. (The only other ones I had with original sleeves were the Haydn Toy Symphony, the 2 records of Mozart dances, and the Magic Clock. It was a rare treat to get an original sleeve!)

The Educational Record Center opened, I think, about 1971...and remained open through the 1970s. I was born in May 1963 and I was 8 or 9 years old when I was collecting YPR/CRGs. I first knew Mrs. Hicks when she worked the children's record department at a big Atlanta record store in the late 60s; she knew of my preference for 78s and always had a stock of 7-inch Cricket 78s on hand there. I assume she left there to go into business for herself and that's when the Educational Record Center opened. She called us soon after opening the store because she thought, with my interest in 78s, that I would like the YPR/CRGs. She was right!"

[The ERC was sold in the late 1970s, and eventually moved to North Carolina, where it remains today.-DB]
Posted by David Bonner at 10:06 PM No comments: