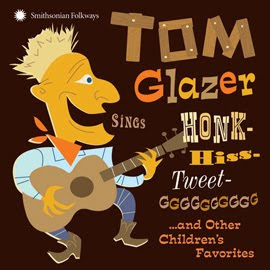 Smithsonian-Folkways has just reissued some of Tom Glazer's classic in-concert children's recordings. Stefan Shepherd has summed it up nicely in a brief review on his popular Zooglobble blog. I like his comment that this CD constitutes a "master class on how to play to kids." As an historical document, it does indeed present abundant evidence of Tom's ability to "tune in" to children and "get them on his side," as one reviewer put it almost fifty years ago. It has all worn very well because the songs are timeless, as is their performance. And some of TG's best singing is here; especially check out his soaring vocals on "Now Now Now." That song, which he and Lou Singer adapted from "Hava Nagila," was originally recorded in 1951 by June Valli and issued as a pop single by RCA Victor; I wish Tom had recorded the single himself!

And now for some discography trivia, which doesn't appear in the CD booklet.... All but three of these tracks were first issued on two LPs: TOM GLAZER'S CONCERT FOR AND WITH CHILDREN (Washington Records) appeared in 1960, and TOM GLAZER'S SECOND CONCERT FOR AND WITH CHILDREN (Wonderland Records) came out in 1962. The Washington disc, and probably the Wonderland disc, consists of solo recordings made in Washington DC in 1959, at one or more concerts sponsored by local record shop owner and concert impresario Robert Bialek, who was also the proprietor of the Washington label. The Washington LP was reissued on Wonderland Records in 1962, and both records reappeared in 1973 on the CMS label as ACTIVITY AND GAME SONGS, volumes one and two. The additional three tracks on the Smithsonian-Folkways CD come from the third volume of ACTIVITY AND GAME SONGS, released in 1977; on these songs, Tom is accompanied by a small band, and it sounds to me like they were recorded in the 1970s, perhaps in proximity to the release date.

As for the cover art on the CD, I do like it, with a reservation or two. The caricature of Tom, which is based on a photo that appeared on a few of his late 1960s LPs, is funny, wonderfully rendered, and probably more appealing to kids than the relatively dry cover art that Folkways is known for. However, I fear that the "wacky" caricature perpetuates the image of Tom as just some guy who wrote silly songs like "On Top of Spaghetti." Compare that to his contemporary, Pete Seeger. Nobody thinks of Pete as a wacky guy, and there are no wacky caricatures on Pete's many children's records. If I had to describe Tom in one word, it would be "literary." He was also serious and funny, witty and corny, scholarly and folky, loving and nasty, proper and bawdy, liberal and reactionary. And maybe a little bit wacky on the side.

Posted by David Bonner at 12:05 AM No comments: